Built at PIRIOU shipyard in Concarneau –France– and delivered in April 2018 by KERSHIP, the Rhône has recently come back from its first long term deployment during which it sailed around the circumpolar region for 19 000 NM through the Northeast Passage, the Norwegian sea and the Bering strait. It returned to home port in Brest after transiting through the Panama Canal.

At the signature on January 22nd, Chief of the Naval Staff Admiral Prazuck  paid special tribute to this deployment in the Arctic waters where the French Navy went through the Northeast Passage for the first time and without assistance.

Garonne- fourth and last vessel of this programme- is  under outfitting in Concarneau and will join Rhône in Brest later this year. 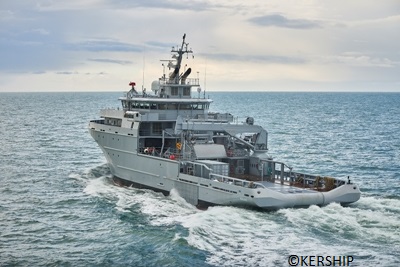