On May 2nd 2017 the third B2M Multi-Missions vessel of the French Navy 'CHAMPLAIN’ left Brest and metropolitan France towards her home port of Reunion island. She will reach by the end of June. In the south of the Indian Ocean, 'CHAMPLAIN’ will carry on missions as patrol, surveillance and protection of the French interests in an Economic Exclusive Zone of over 3 million square metres including Reunion, Tromelin and Mayotte islands as well as the French Southern and Antarctic Territories.

The first two B2M vessels of the programme, ‘D'ENTRECASTEAUX’ based in Noumea (New Caledonia) and ‘BOUGAINVILLE’ based in Tahiti (French Polynesia) both were admitted to service in 2016. ‘CHAMPLAIN' is the first vessel of the French Navy being equipped with the new generation ‘COMCEPT’ satellite transmissions system, allowing an always-on telephone and broadband Internet connexion at sea.

After they left Brest in the morning, Commandant Montastier and the ‘CHAMPLAIN’ crew, under way for their next destination, sailed past the bay of Concarneau to greet the PIRIOU naval shipyard! 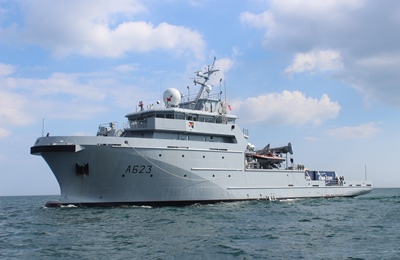 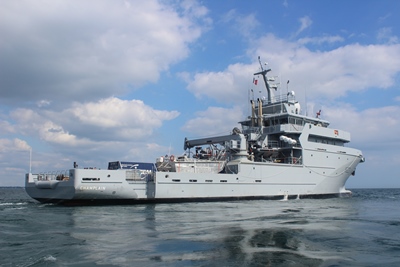